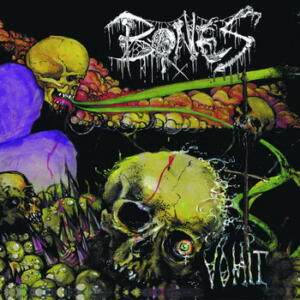 Chicago, Illinois’ “sons of sleaze” Bones return with their most in-your-face release to date with their aptly titled fourth studio album, “Vomit”, preparing to release the demoralizing record through Disorder Recordings in October.

Bones unites drummer/vocalist Joe Warlord (Usurper), guitarist Carcass Chris (ex-Usurper), and bassist/lead vocalist Jon Necromancer (Contrition, High Spirits, ex-Usurper). “Vomit” sees The Windy City’s filthiest trio continue their signature blend of death, thrash, and black metal on cuts like “Beware of Ghouls” and “Noose”, while also venturing into sludgier elements on the title track and ripper “Tower of Skulls”. Drummer Joe Warlord even treads in early Neurosis territory on the tribal drum heavy instrumental, “Retch”. While these elements are truly new territory for Bones, overall, the band relentlessly sticks to the roots of their tainted peers in Autopsy, Coffins, Nunslaughter, and the like.

“Vomit” was tracked over two days at Steve Albini’s Electrical Audio by Jon San Paulo (Shellac, Pelican, Neurosis) and one day at Hypercube Studio with Sanford Parker (Voivod, Darkthrone, Leviathan). The album was then mastered by Collin Jordan at The Boiler Room (Macabre, Eyehategod, Ministry) and completed with gruesome artwork by XNA Casperson (Dawnbringer, Zuul) and design by Eva Flora. Nick Hernandez (Dysphoria, ex-Kommandant) provides guest vocals on the closing song – a cover of Van Halen’s “She’s the Woman” – which was recorded just days before Eddie Van Halen’s death and will be a CD/Bandcamp exclusive track.

Prepare to defile your eyes and ears… “Vomit” is the grossest album of 2022.

Check out a brief teaser for “Vomit” below.

Disorder Recordings will release “Vomit” on CD and digitally on October 28th, 2022. Find preorders here and stand by for audio previews and more to post over the bleak weeks ahead.

The day after the release of “Vomit”, Bones will celebrate the record with a hometown release show October 29th supporting Autopsy with additional support from Cardiac Arrest and comedian Dave Hill. Watch for additional shows and tour dates to be posted over the months ahead.