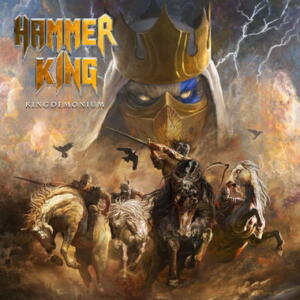 Hammer King continue to prove themselves as an unstoppable force in the German heavy and power metal world – under the banner of the mighty king, the band announces their new studio album, “Kingdemonium”, set for release on August 19th, 2022!

Only 14 months after the release of their self-titled album, which put them on the radar of each heavy metal fan with their first Top 50 chart entry, the Germans deliver another strong release while showcasing a different side of their self-curated fantasy world full of perfectly intonated tales and stories – a holy feast for fans of genre giants like Powerwolf, Manowar or HammerFall!

Together with the album announcement, the band around former Ross The Boss singer Titan Fox V have released the first single and official video taken from the new record! “Pariah is My Name” is an undisputed banger packed with strong vocals, mighty guitar riffs and pounding drums. The song, in trademark Hammer King storytelling manner, offers a powerful first insight of what fans can expect from the new full-length.

Hammer King on “Pariah is My Name”:
“Wake up, the firstborn is dead – ‘Pariah is My Name’! One year after the acclaimed juggernaut that Hammer King, the album, was, we are primed and ready to kick things off with a truly massive song: ‘Pariah is My Name’. The track has been our choice for the first single right from the start. Utilizing the Savatage-tuning, it has turned out very powerful and urgent, while lyrically it shows the kingly narrative from a darker angle. Reflecting on the past years outside the Kingdom, the message is clear and simple: Never surrender, the resistance is here – and ‘Pariah is My Name’! God bless the King, may the King bless you”.

Watch the official music video for “Pariah is My Name” below.

“Kingdemonium” highlights the core essence of Hammer King and fully reflects on the strengths of the band, kicking off with first track “Invisible King”. The title track, “Kingdemonium” then proves its pure power from the first note and goes all the way with thundering drums, riffs made of steel, and energetic vocals. Followed by “The Four Horsemen”, starting off slower, the track quickly picks up the pace mid-journey through the world of the Hammer King. “Guardians of the Realm” (feat. Ross The Boss), stands out from the rest with the vigorous vocals riddled with acoustic guitar elements, while “Live Long, Die Nasty” is a future live hit that will have all crowds screaming along immediately. An album made of pure steel in the name of the Hammer King!

“Kingdemonium” will be available in the following formats:

Bonus Tracks:
Mark of the Beast
Ashes of My Oath
Holy is the Hammer
Hammerschlag (Gerre version)

Einherjer to release new live album “Norse and Dangerous (Live... From the Land of Legends)” on August 5th 2022