Sweet played an incredible show and remind us that even if they’ve been around for a while, they surely did not lose their touch!

by Selena
in Gigs 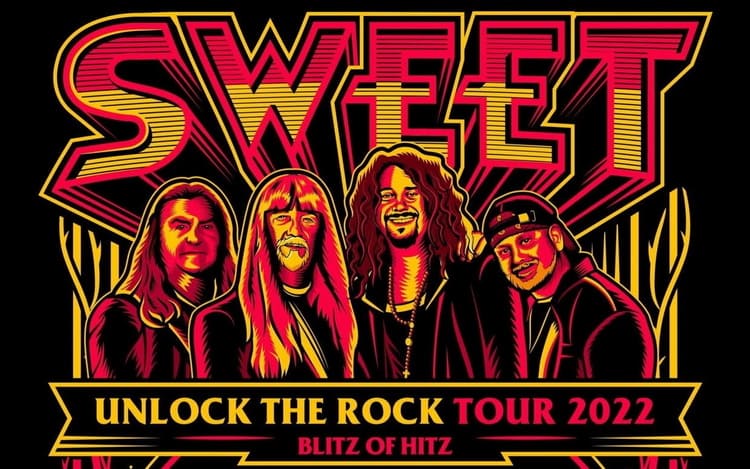 After a couple of weeks of break, I’m making my way to the Islington Assembly Hall, in London, on a cold Sunday in December to watch the legendary Sweet in their Unlock the Rock Tour!

In the first band of the night, we have 2/5 of the British southern rock band Kira Mac. They are from Stoke-om-Trent and take their name from their statuesque and incredible frontwoman, Kira Mac (a.k.a Rhiannon Hill), who not only dominates the stage with her husky voice, soulful voice but also gets everyone’s attention with her presence. The band’s foundations lie solidly based on straight-up old-school blues rock riffs and they’ve added in the mix a modern edge, a tone of fresh flairs and soul and an intense double shot of good old rock and roll.

They have performed in big venues such as The O2 as well as venues across the county.

As mentioned, as they have just finished last week their headliner tour, tonight only Rhi and guitarist Joe Worrall are playing and delighting us with a very intimate acoustic set that left me with the curiosity to see what the band at full force can deliver. Their set is short, but they gift us with a few tracks that are included in their freshly self-released debut studio album “Chaos is Calling” (November 18th) that leave the audience astonished.

The songs sound great and between songs, Rhi is a chatterbox (I mean I can relate to that) and is telling us, with great enthusiasm, stories of their time recording that make everyone giggle. I will definitely go and watch Kira Mac next time and so should you!

Just in time for a quick instrument change, with the crowd screaming their name, Sweet takes the stage.

The Sweet (often shortened to just Sweet), is a National Treasure, a British glam rock band that rose to prominence in the 1970s and took every continent by storm for more than five decades and sold over 35 million albums worldwide. The group was originally called The Sweetshop then shorted The Sweet.

The Golden Thread that links the past into the present and into the future is Andy Scott. His determination to maintain high standards with the band’s musical legacy and touring is legendary. The band today has an illustrious pedigree recreating live the high energy and soaring vocals associated with the Sweet sound that is the band’s trademark.

Back in 2019, Sweet was faced with some unexpected sudden changes in their line-up with now Paul Manzi taking over lead vocals and Lee Small coming in on bass, following the departure of Pete Lincoln and Tony O’Hora and with Steve Mann guesting on keyboard & second guitar they only played a handful of gigs together before they had the time of rehearsing during the long Covid period.

The new line-up has given the band a whole new personality and even though Andy Scott is the last man standing (following the sad death of Steve Priest) has bottled up the spirit of Sweet over the years and unleashed it here and now.

But let’s jump back into the present as they are putting up an incredible performance tonight. Manzi is a hugely talented vocalist and mixed with the rest of the band they managed to leave everyone speechless singing along for the whole night.

I’m definitely amongst the youngest tonight as the security guard pointing at me comes up with a “you look a little too young to be here”, but let me tell you that music doesn’t have an age and I’m lucky to be able to witness such a great band in action.

As well as popular hits, the band performs tracks like “Windy City” and “Set Me Free” that set the audience even more on fire.

After “Fox on the Run”, the audience knows that it’s not the end, in fact, we got the encore with two more songs such as “Blockbuster” and a great finisher of “The Ballroom Blitz”. Sweet is back and they are a fabulous band despite being on the since for over 50 years they are still able to make your dream on the notes of their sweet sweet rock and roll!

The Damn Truth live at The Black Heart in London 2022

Before The Dawn signs worldwide deal with Napalm Records